I am ridiculously competitive sometimes. Last week, when I was listing the few contents of a room for Querido, he jokingly bet that the spinning wheel in the closet would stay there until we moved again. It wasn’t meant to be a challenge, but clearly I didn’t have enough to do, because I took it as one.

I set up the spinning wheel in the middle of the living room and grabbed a bag of very lovely Arizona Alpaca roving, and spun. 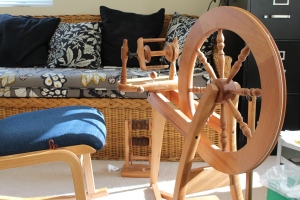 Getting a spinning wheel out requires a bit of a mess.

The alpaca was nice to work with, once I realized that the knobby thing under the spool adjusted how fast the spool took up the yarn. I zipped through the small bag (half an ounce of fiber?), finishing it off just as I felt like I was getting the hang of my wheel.

Melba had a hard weekend.

We waited for the singles to set, and then plied.

It’s yarn! Not a lot of yarn, and not very good yarn, but yarn I made!

And now I have yarn! I was pleased to have my wheel out, and to win Querido’s non-bet (or perhaps allay my own fear) that I would never use the thing. But at the same time…it was over so quickly. I think I had this fantasy, that I would learn how to spin in one sitting and magically start making the kind of yarns I like to knit with: fine, even, plied yarns. I was never one for novelty yarn, even in those dark days when fun-fur mania spread rampant and unchecked through crafting circles. Even now, I regard high-end sequin yarns and slubby yarns with suspicion. Although I don’t know much about handspinning, I know that one spool of thick, dense yarn will not go very far, and what I have will only be suited to the sort of pattern that shows off a slubby yarn…the kinds of yarns that I usually avoid like the plague.

If I’m going to make this work, I’m going to need several ounces–maybe a pound–of plain fiber, so when I make more dense, slubby new-spinner yarn, at least there will be enough to make a wonky hat for some unsuspecting acquaintance.

9 thoughts on “Will Too”