While I was pondering where the dickens my summer went, I remembered there was this other thing I knitted. It was a blanket called Intarsia Mountain, a test-knit for the super cool, super nice Heidi of Hands Occupied. It was sort of large-ish.

Ok, it used seven skeins’ worth of yarn in 10 colors, I guess that qualifies as a properly large project. But I had so much fun knitting it, the month passed very quickly.

My last experience with intarsia was knitting the Leaf Pullover by Donna Brunton, published in Knitting in America. This was in my early days as a knitter, so I didn’t really understand that yarn came in different thicknesses and was produced at varying levels of quality. I was also in middle school, so my fashion sense was very nascent. Put those things together and you get a teenager knitting a sweater designed in 1996 for sportweight alpaca with bulky-weight novelty yarn. On the size 3 and 5 needles called for by the pattern.

Let’s be clear, the sweater design was very much of its time but not inherently bad.  If I’d used the recommended yarn, or at least yarn that was the correct weight, I would have created a sweater that would have quickly became dated, but was at least in keeping with the original design.  It was the execution of the pattern that was ill-conceived, resulting in a finished product that was so terrible sweater that when I finally donated it to Goodwill, I felt really bad for the people shopping at Goodwill.

Fast forward fifteen years, and Heidi asked me to test her new pattern.  Enough time had passed since the Terrible Intarsia Sweater that I decided I could give it a go. 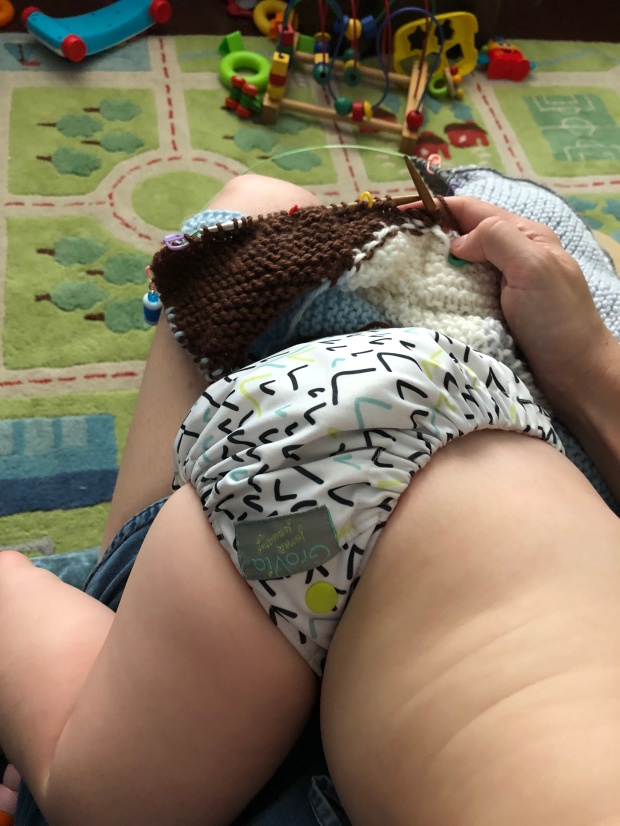 By day, I knitted.  By night, I read the book (The Snow Child, by Eowyn Ivey) that would accompany the MRALKAL when the pattern was released.  I was pleasantly surprised that I remembered the basic mechanics of intarsia, and the way the pattern is written–just a few color changes at first, building to a ton at the end–helped me get back into the swing of tail management.

There’s a lot of knitting in an intarsia blanket, but the fact that it’s garter on big needles, plus the excitement of wanting to see what the next row looks like, and the next one, made the knitting go much faster. I’d like to think I could have chosen an appropriate yarn by myself, but Heidi got yarn support for testers (thanks Heidi!) so we didn’t have to find out if that was the case.

As always, Heidi did a marvelous job of human-proofing her pattern, so I made it to the end without mishap.  My confidence in my ability to knit intarsia has been fully restored–I think I could even put it on a sweater.  Maybe.  The monsoon was going strong as I finished the blanket, and I was really excited to photograph the knitted mountains against some real mountains, with big puffy monsoon clouds in the background.  So I hopped in the car with my friend of shawl-photographing fame, and we drove down to Tucson to do just that.

I would definitely recommend this project to anyone looking for an impressive but not difficult holiday knit.  In addition to general human-proofing, Heidi has some awesome accompanying materials to help you take your intarsia to the next level (I am particularly thrilled by the geekiness of her video for calculating the yarn needed for each intarsia section).

Really, the only problem I had with this project was that I finished reading The Snow Child halfway through knitting the blanket.  It’s a fabulous book, elegant and haunting with such vivid descriptions of the Alaskan wilderness you can imagine yourself on the frozen mountainsides and snowy plains.  The blanket perfectly captures the raw feel of Ivey’s descriptions of Alaskan winters, but my Anglophile tendencies mean that most of the authors I know write about raw dampness rather than mountains and snow.  Even after the knitting is done, I could go for some wintry escape reading.  What are your recommendations for books set in a snowy clime?