This plan began, as many knitting plans of dubious clarity do, with clearance basket yarn.  In my case, Spud & Chloe Sweater in a nice pea green.  There was just enough to make a little sweater, so I made Peanut a Flax pullover and he looks adorable in it. 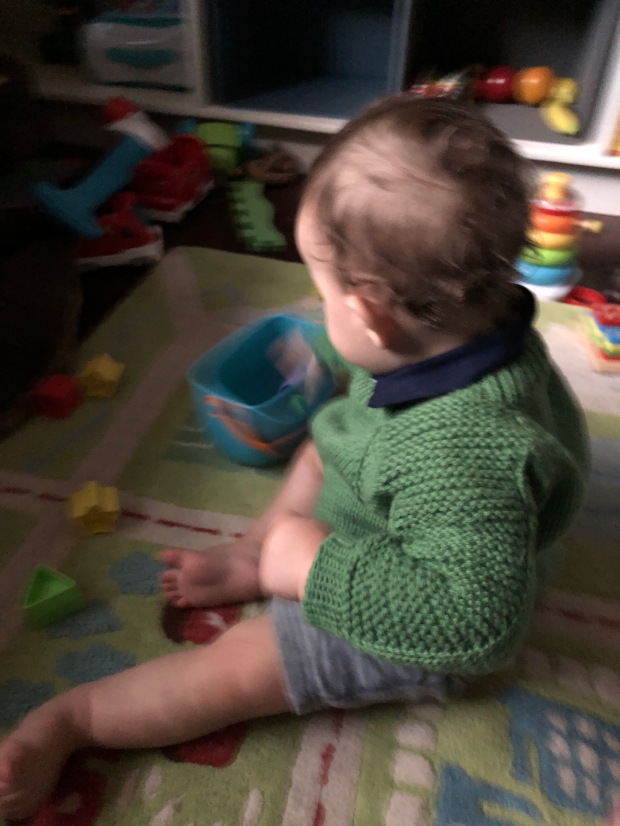 I whipped it up in something like two weeks, and it was so darn cute, and I must have had the plan to do Christmas sweaters before I finished it (the details are a little fuzzy now) because I already had the yarn special ordered and delivered and balled and the neckband cast on the day before Peanut’s was photographed.

So all you embittered Midwesterners who dream of moving away from the winter cold, just know that if you do, that late-summer madness will set in and you’ll find yourself plotting outrageous holiday plots involving a mile and a half of yarn when it’s still 90 degrees outside.

Oh that’s right–the really insane part.  I want all these to be done by the day after Thanksgiving so we can photograph them that weekend and use them for Christmas cards.  Before you pull out the straitjacket, know that I’m planning on using Shutterfly or Minted or something to get them all printed and mailed, not printing and writing and mailing them all myself, which I totally have done in years past.

Rigght now, I am here on Querido’s sweater: 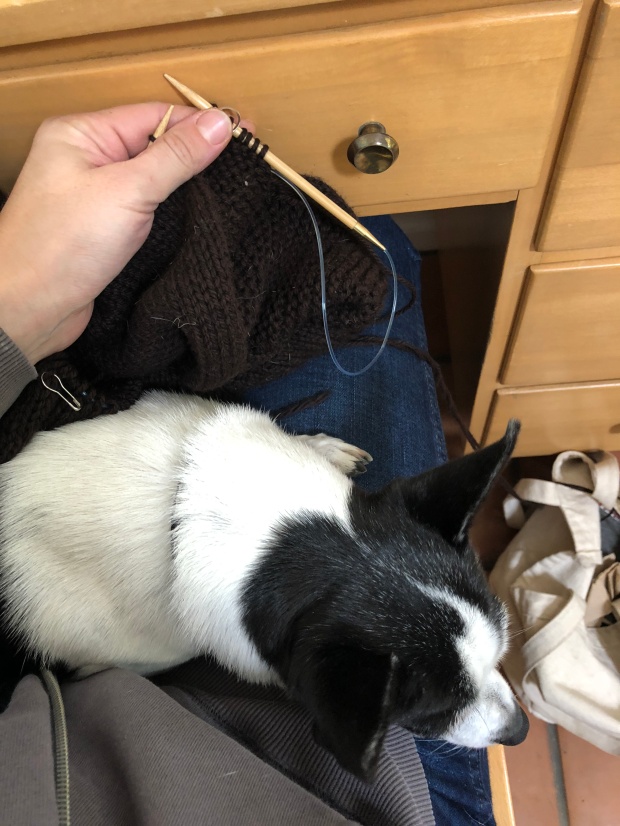 Dottie has resigned herself to her fate as a sweater rest, which is good because I’m at 10 inches of the 20-inch sleeves.  I am doing them two at a time, which is a huge pain in the butt and yet the best solution I have found for keeping my sleeves the same size.  Somewhere in the house is the body of my sweater, lacking maybe an inch of length and some ribbing before it gets its own sleeves.  I got it going while I was wet blocking Querido’s sweater and fretting about my gauge, and boy was that a lifesaver.

Also saving my life is having my workspace opened up again.  After we moved in, it became a craft storeroom/dumping ground for things that didn’t fit in the house.  By August I could barely move around in here, so we purged, selling what we could in a yardsale, taking other things to the Art Resource Center, and sending the rest to a local charity we support.

I hadn’t realized how much I needed a quiet space to work uninterrupted until I could come out here again.  Early toddlerhood has hit Peanut hard and for reasons that are known only to him he is determined to summit every piece of furniture we own.  Preferably after confiscating something either pointy or breakable from a place that was out of his reach mere days ago.  When he’s awake, I’ve become like one of those talking toys, the kind that cycle through the same three phrases when you press a button.  Except instead of “there’s a snake in my boots!” I say “let’s play over here!” and “be gentle with the doggie!” and “where did you get that?!”  I have invested a lot of energy over the years in combating my natural tendencies towards distraction and having to my attention span forcibly shortened takes a toll.

With my workspace opened up again, I can tuck him in his crib for a nap, sneak some dishes into the Barbie Dream House Dishwasher then come here, with Dottie, and work on a project. Except for a good two weeks after we had cleaned it out, I would talk myself out of working in here. There was handwashing or laundry or something. And then Thanksgiving started to loom large, and I realized, for perhaps the first time in the many years I have been instigating these absurd projects: having a deadline is how I “force” myself to spend time doing something I love, something that relaxes me and gives my creativity an outlet.

Note: I wrote this Thursday and found it Friday afternoon. That post button. It’s a thing. So happy weekend, everyone. I hope you’re making time for all the crazy projects that keep you sane.

2 thoughts on “Of Course it Will Work”