But tonight the baby is in bed and the blogging is actually happening.  Let’s think back to the summer, when we were all alternately sweating while wearing as few clothes as decency permits and freezing in absurdly cold air conditioning.  What do you knit during those times?  I discovered that in the summer, I knit shawls.  The photos of the finished shawls represent two opposite ends of summer weather: a bright, clear morning up north and a dark monsoon afternoon in the Valley.

The first shawl is the Lunar Phase Mystery Knitalong shawl, which I stumbled upon via Alex Tinsley’s Wild Hunt Instagram feed.  I really, really wanted the companion pin she made for the project, so I joined the knitalong for this 900+ yard shawl.  Wanting the pin is always a good reason to randomly undertake a huge project, right? 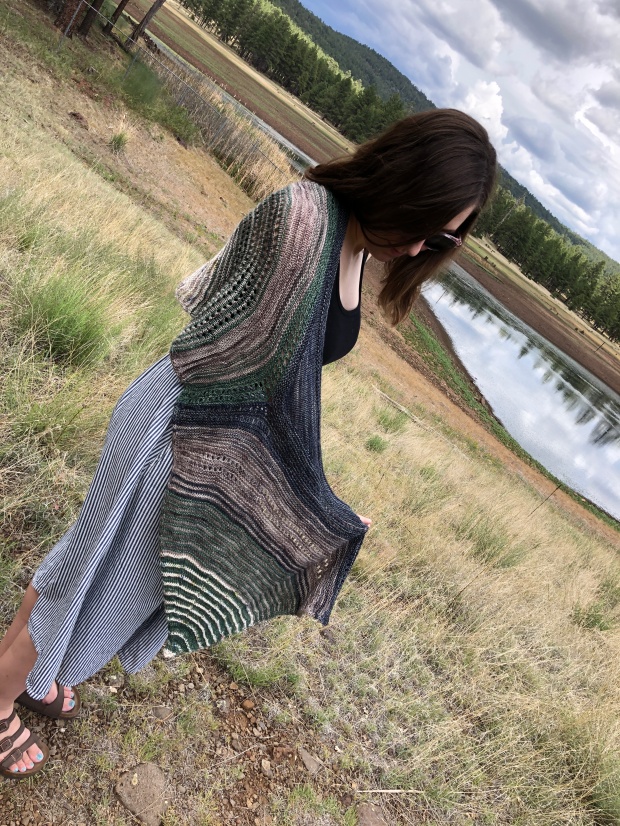 (Please forgive the Dutch angle on the second photo–Querido was my photographer that day and he saw Mission Impossible at an impressionable age.)

I had a great time working on this shawl: there is just enough interest in the stripes to keep one knitting, but not so much intricacy that you have to be glued to the pattern.  I was also completely in love with this color scheme–made up almost entirely of stash yarns, I might add–and how all the colors worked together.  I also could not figure out how the three separate sections were going to come together, so assembly was a fun puzzle.  Aaand now that I look at the Rav page for the pattern, I realize that both photos were taken with the shawl on upside down.  Sigh.

Moving on! My second shawl of the summer was a long-term UFO, a Find Your Fade shawl started last summer.  I know I was late to join the fade party, but towards the end, as fade after fade streamed by on my Instagram feed and knitters moved on from faded shawls to faded sweaters, I felt like I was in real danger of being the last knitter on the planet still working on her Find Your Fade. 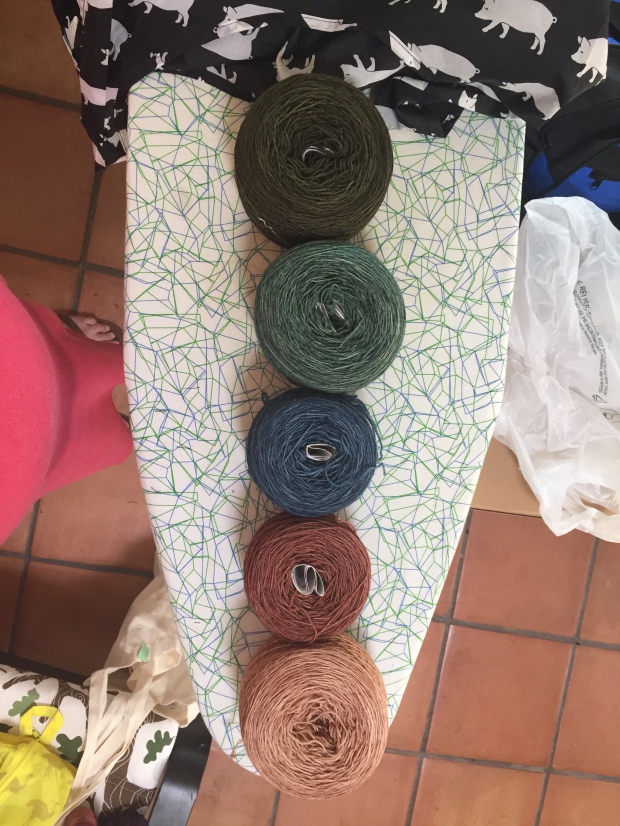 All the yarn I was using was dyed by a local dyer, Gherkin’s Bucket, and purchased specifically for this project.  I liked the colors, but the fade from green to brown via navy was becoming heavy as I saw it on the needles. 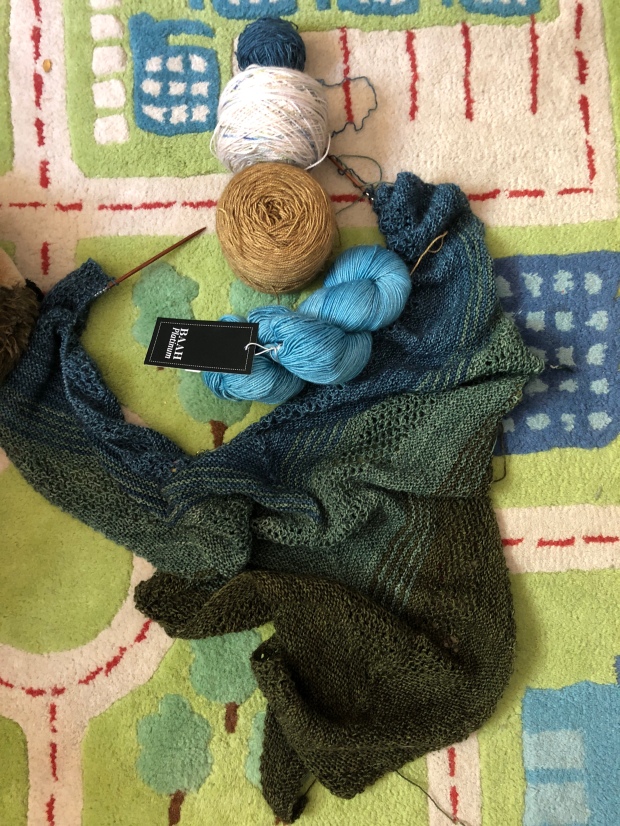 One day I was knitting on it at my LYS and lamenting how I’d stopped loving the last two colors, a pair of browns*, and a staff member made a revolutionary comment: “You can just change out the colors in the second half of the shawl.”  Until she pointed this out, I hadn’t realized I was trying to fix my broken color scheme by knitting through it, rather than going around it.  I ripped back, played with some new colors, picked three entirely new ones, and the rest of the shawl flew off the needles.

I enticed a friend to take pictures for me at a local cider brewery, which would have been a perfect plan except we lost track of time and were caught unawares by a monsoon storm.  We pulled the shawl out and she started photographing as the dust storm presaging the rain descended and what should have been a bright afternoon became dark as night.

And now, fall is finally sneaking into the Valley. It seems like summer was long, but it also went by quickly (see above comments on Groundhog Day). I’m ready to bundle up in one of my new shawls and cast on for a nice comfy sweater. What new knits are you wearing as fall approaches?

*There’s nothing wrong with these colors, and I am quite happy to have them for another project, but they were not making me happy in the fade.

7 thoughts on “Summer of Shawls”