Hello dear readers!  After getting myself into a grump thinking about Thanksgiving, I did my best to return to a better mood with lots of knitting.  That helped a lot, and discovering that 10 Things I Hate About You is now on Netflix erased all the rest of my grumpiness.

Today, I bound off my oldest UFO and turned my attention to updating my stash.  As I pawed through the small mountain of skeins (a very slight exaggeration: the stash update will require at least two posts), I realized that I hadn’t posted about my biggest yarn-buying excursion of the year: the Central Kansas Yarn Hop. 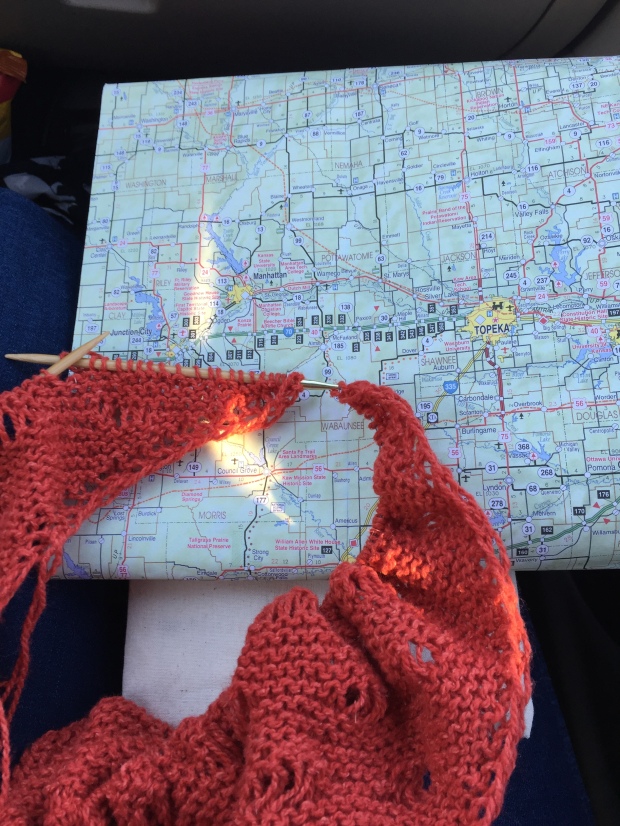 Do you all have yarn hops in your area?  There wasn’t one in Phoenix, for the simple reason that it would be a sad little set of hops.  Here in Kansas, several stores get together and for the week of the yarn hop, offer a free pattern with the purchase of a certain yarn, plus extended hours, sales, and a prize drawing for everyone who drops off one of the raffle tickets included in their passport.  The event covers eight yarn stores and a huge area.  Math is not my strong suit, but the route is roughly triangular, with the points of the triangle being Topeka in the east,Winfield in the south, and Salina in the west.  The distance from Topeka to Winfield is 156 miles, Winfield to Salina is 130, and Salina to Topeka is another 108 miles (Note: all distances are between yarn shops).  If someone in the audience is mathy, please tell me how big an area that is.  All I know is that once you add in the other five stores in between, you’re doing a lot of driving.

When yarn hop passports went on sale late this summer, I tentatively floated the idea to the adventure group from work.  Some of them know how to knit, but none of them are so obsessed they got a passport early because they couldn’t stop telling their LYS owner how excited they were for the yarn hop.  To my surprise, two of the adventurers signed on.  I volunteered to navigate, our newest colleague brought snacks and podcasts, and off we went.

First stop was iYarn, in Winfield Kansas.  We left the Flint Hills heading south, and soon found the part of Kansas that everyone thinks of when they think of the state: flat, with miles upon miles of fields interrupted with the occasional tiny town, complete with an old-west bank and row of storefronts.  iYarn was in one of these old storefronts.  The owners were delightful, and they had a fabulous selection of yarns.  Not too many novelties, and a mix of big names and more specialty brands.

By the time we were in Winfield, everyone decided that we were so close we might as well go to Oklahoma, so we yelped Newkirk, the nearest town on the highway large enough to have a real restaurant.  Three were listed on Yelp, one of which seemed permanently closed.  The Stagecoach Bar-B-Q seemed the most authentic of the other two.  Authentic it most certainly was, with bikers out front, a no-frills interior, and a menu of foods that were either barbecued or fried.

Properly provisioned, we headed back up to Wichita for the Heritage Hut.  The owner of the shop was retiring, so everything was massively discounted.  They had a lot of acrylic (we all know how I feel about acrylic), but were also selling handwoven baskets for next to nothing.  I scooped up only one because I have almost as little restraint when buying baskets as when I am buying yarn.  Thinking back, they were all such a great price I am sort of sad I didn’t buy more… 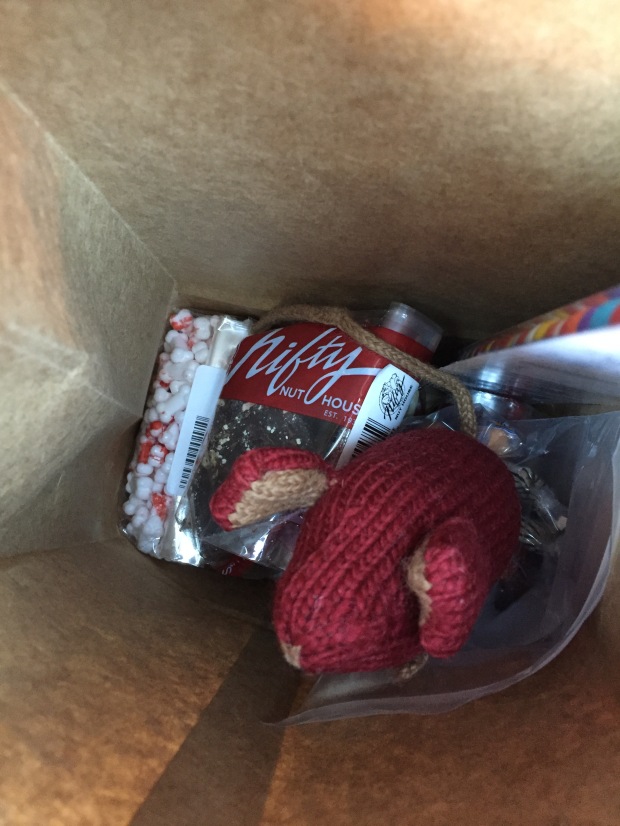 Need I say we all fell hard?  With enough candy to last us until next Halloween, we headed north to Newton, Kansas, which has another cute downtown with antique stores, a kitchen supply store, and of course, the yarn store.  The Creation Station has a lot of affordable options, wool/synthetic blends and cottons, as well as an extensive stock of ribbon.  I forgot to take a picture because by that time it was getting late and we were in a rush to make it to Salina.

I had never been to Salina before, and was pleasantly surprised to discover how large and energetic its downtown is.  There were fun-looking shops, several restaurants, and a pretty old theater, and people were out and about enjoying their Saturday night. (As an aside, to say I’ve never been to Salina is not saying much.  Of all the towns we visited that Saturday, the only one I had been to before was Wichita, and even then I was only there for an afternoon.)  Yarns Sold and Told bills themselves as “The Second Friendliest Yarn Store in the Universe,” and they really were that friendly.  The store is very large, and carries a variety of the kinds of yarns I like best: natural fibers, lots of fingering weight, several local options, and several hand painted and hand dyed lines.  I dawdled a bit trying to pick out a suitable yarn for their special yarn hop pattern, and all the sudden the day caught up with me.  Abilene is a scant fourty minutes outside of Salina, but my two fellow adventurers were also pretty wiped and it was getting close to closing time, so we packed ourselves and our yarn back up and headed out of the flatlands and back into the Flint Hills.

The flat part of Kansas (Morning shot, just reverse the sun and you’ve got the evening version).

Now that I think of it, I’m a little tired just writing about all that driving.  The shops from day two of the yarn hop will have to get a separate post, but before I sign off, I should mention the stashing.

I was very proud of my restraint on the whole trip.  I purchased only a few skeins at each shop, and purchased only for gifts.  The top left yarn has already been knitted and gifted, the top right yarn is on the needles, and if all goes well, three of the other four will be knitted into Christmas gifts.