Hello All!  If you are just tuning in and wondering what this yarn hop thing is about, check out yesterday’s post.  All caught up?  Let’s talk about day two.

When I’d first proposed this scheme to my adventure buddies, I had no expectation of them spending an eight hour day with me, let alone signing up to do a second day and finish our route.  But librarians are nothing if not tenacious (one of our many endearing qualities), and so off we went on Sunday to finish what we started.

We started close to home, at Unwind in Manhattan.  Mousie got to meet the shop puppy, Stitch, who was meeting ALL THE NEW FRIENDS.  Stitch really is a puppy, maybe a year old, and he will wiggle all over with excitement when you walk in the door because in his short time on this earth, he has learned that people love to pet him and give him kisses and cuddles.  He has us all trained.  Mascot aside, Unwind is a terrific shop with a solid yarn selection (extra gold stars for all their excellent color choices and American-sourced yarns), a good selection of notions and magazines, and even some weaving supplies.  The owner is nice and laid-back, and knows her stuff.  Because I have a mental wishlist for Unwind, it only took a moment for me to pick out some Dream in Color Canyon in a nice variegated gray that I think will make a nice gift cowl or hat.

One down, we headed east.  There was a small moment in Salina on day one where I spaced out and lost track of which way the street numbers were going, but other than that, navigating by map worked marvelously, so I brought it out again.  We were far enough off the beaten path to lose service in spots, and even when cell service was there, I would have needed several miles lead time to wait for the map to load with enough detail to figure out where we needed to go next.  The state map got us most of the way to each destination, and then the mini-maps in the Yarn Hop Passport got us the rest of the way to where we needed to go.

Total tangent: the map is one of those free ones you get at state parks, and it is AMAZING.  It lists the mile marker number for exits, and the miles between landmarks on the map.  I can’t tell you how many times I have had drivers (always of the masculine persuasion) become somewhat less than composed when I tell them to turn left at the fifth stoplight, demanding mileage and perhaps forgetting, in the heat of the moment, that Google does not give you distances between changes of direction unless you enter navigate mode, which is a terrible mess and takes too long to get in and out of, especially when the person in the driver’s seat is exasperated and impatient.  On the paper map, that little mileage number is right there.  For the minutiae of city driving, I will continue to use Google maps (other half of the population, you’ve been warned), but why do we never use paper maps on road trips any more?

Ahem.  Back to yarn hopping! 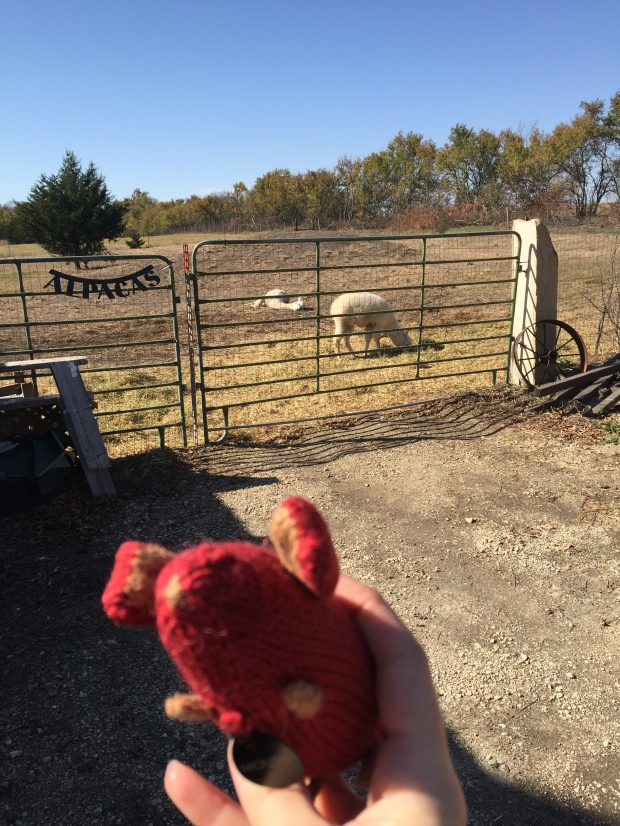 Stop two was Alpacas of Wildcat Hollow, which was just fun.  The shop is pretty neat, a little room off the barn, with yarn, fiber, and garments (socks, capes, etc.) The owners were friendly, and although we didn’t get to cuddle any alpacas, just getting to see them wandering about made the stop brighter.  There are two ways into the farm, and apparently one is “unimproved,” which I take to mean impassable in anything less rugged than a pickup truck, but if you’re coming from the west, the most logical route in is easily navigable by a small car.  I came away with yarn to make their yarn hop pattern, a pretty cabled scarf, as well as a chubby bag of dove-gray fiber, because how could I not?

Both the paper map AND Google maps failed us when we encountered a construction detour just outside Topeka, so we were a bit rushed by the time we arrived at Yak ‘n Yarn.  Fairlawn Plaza, where Yak ‘n Yarn is located, is just the weirdest mall I’ve ever seen, but in addition to the yarn store, there is a pretty good baking and party supply shop, so it’s worth the trip.  The owner made sure we didn’t need anything, then very kindly left us to our own devices as we speed-shopped.  I did very responsible single loop around the store, picked out some recycled cotton, and we dashed out to Abilene.

As we were driving, we realized it was going to be a close call.  There were a fair number of other cars on the road (an unexpected situation), and the Shivering Sheep is several miles off the highway.  We all wanted to make it, to complete the route and hit all eight stores, but the sun started to slant before us and we tentatively entertained the possibility: what if we didn’t make it?

We called ahead to verify the closing time, I counted miles and did the math (with my phone as a calculator because I can count but asking me to add in my head will give you a number that may or may not be the right one), and finally accepted that we were going to get to the Shivering Sheep half an hour after they closed.

I think it was our driver who pointed out that we should finish the route, closed store or no.  We had come this far, she argued, how could we not?  Also, she knows Abilene best of the three of us, and knew of a place we could get dinner.  For me anyways, that helped seal the deal.  We drove to Abilene as the sun was rolling down the sky, took our pictures in front of the Shivering Sheep (with our passports and sad faces), and consoled ourselves with dinner at the Brookville Hotel. 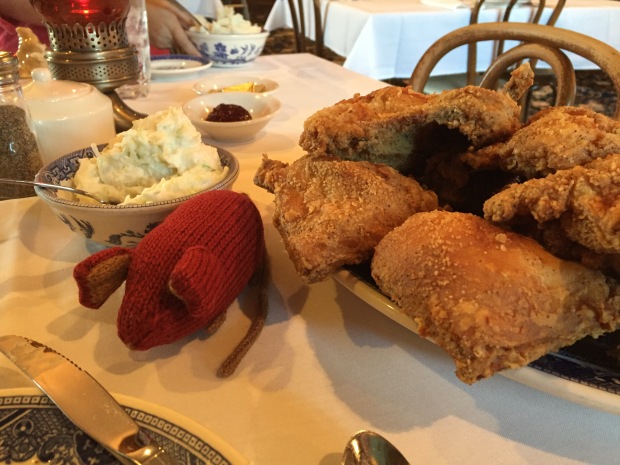 Fried chicken after a long day of driving makes for a pretty good consolation dinner.

Day two yarn was a little more restrained in terms of purchases but I am still really happy with my yarn choices, and I’ve got some more good gift-knitting yarn.

Of course, the best part of the yarn hop was that I have two colleagues I can call friends, and the kind of friends who can survive an entire weekend in a little car together.  Even if yarn isn’t included, I can’t wait for the next time we (and the rest of the adventure group) get to explore our new new home state together.