Here we have it, a second post in as many days! I may get back on track yet.

We have talked about my thing for knitting weird toys for new babies before. If a president’s publicity stunt can make predators children’s toys, I see no reason why prehistoric and mythical creatures can’t be children’s toys too. I can whip out a Nautie in no time. My first blog post, as a matter of fact, featured a Nautie. The most normal thing I can manage is a hedgehog.

Sometimes, the parents are not looking to reimagine normal when stocking their little one’s toy basket. They are quite happy with bears, thank you. (These are the people that get hedgehogs) But this year, one of Querido’s friends announced that his family was welcoming its first little one, and for the first time ever, I was knitting for a parent that would absolutely love a strange softie.

No animals were harmed in the making of this alien, but one small dog was reminded that her owner is crazy.

Specifically, an Alien softie. I had a vision: egg-shaped baby sock, matching bonnet, and chubby little facehugger to keep the baby company in his stroller.

The egg was the hard part: I couldn’t find a pattern for an egg-shaped baby sock, nor even a giant Easter Egg softie, so I had to take the proportions of a little Easter egg softie and wing it. 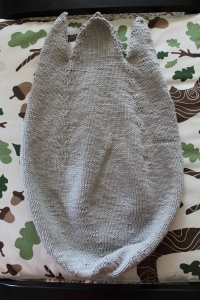 Alien Egg — after I got carried away and took pictures, I blocked it and secured down the flaps with buttons

The bonnet is from Joelle Hoverson’s Last Minute Knitted Gifts, and the time rating is accurate: Miss Dawdling Knitter finished in about 3 hours. Apologies to the mother-to-be doing all the hard work: I think this is the only part you’ll like. 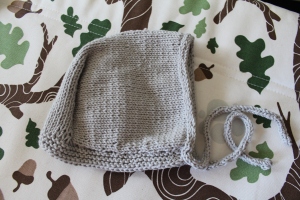 The bonnet, which will coordinate with normal outfits too

And the pièce de résistance, the facehugger, came from a pattern on Craftster. I doubled worsted yarn to make it chubby, modified the carapace shaping slightly, and shortened legs and tail to reduce the choking hazard. Full notes on Ravelry

When everything was finished, I stuffed the bottom of the egg with tissue paper to give it shape, then wrapped the facehugger in pink tissue and stuffed that into the top of the egg. (Taking pictures of my wrapping would have been smart, and yet I did not think to do so). The whole thing went into a silver gift bag and off to the father-to-be.

Ever the perfectionist, I was concerned about the shape of the egg, and hoped that a facehugger with only two sections per leg would not be unacceptably inaccurate (they should have three). But my fears were unfounded–our friend loved it.

So if you see a baby out and about in its Alien suit, know that a few dozen sea monsters are not far behind.