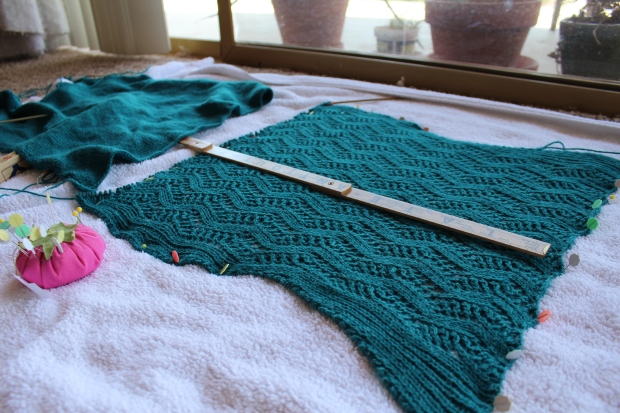 The movie blanket keeps coming, slowly, but I am also trying to work on other things. You know, for those occasional times when you don’t want to carry two utility-size skeins’ worth of work on the light rail.

One of the projects I have been attempting to get started up for transit knitting is my Holla Back Tank. I started it last year, and while it’s pretty easy to knit, it’s not a blanket. I have to make it a certain size, and length, so it gets derailed every time I need to measure it.

(A few people on Ravelry have fussed about the lace pattern. I don’t know why. It’s lace, so yeah, you’ll have to check on it a few times a row, but that’s about as bad as it gets.)

The last time I set it aside for measuring, I was pretty sure I was ready to bind of for the underarms. To be sure, I had to block it too. That all happened a week ago, but it is still on it’s blocking towel, because I don’t want to believe what I found. The bottom half of the back (below the waist) is only as long as the bottom half of the front when you yank it into place and pin it down with pins every half inch. Let it go, and it is about an inch shorter. After the body of my Red! cardigan turned out too wide, I don’t want to be hasty, but I’ve measured several times and every time it’s shorter.

Has anyone else knitted this tank? Do you have any tips for me? I don’t mind the ripping back (too much), but how far do I go? Can I add that inch to the space between waist decreases and increases? Or do I have to add it to the bottom, before the decreases? Or if I leave it on the blocking towel and stare hard at it a few times a day, will the length magically appear?

I’m kind of hoping it’s the last one.

4 thoughts on “Not Quite as Planned”