Thank you readers for sharing your suggestions for positive alternatives to all the political nastiness going on out there!  Hearing about all your constructive activities was very encouraging.

Knitting (and buying yarn) has remained my primary response to stress lately, which was all well and good until I realized I had four projects that had been trotting along, somewhat irregularly, without me checking in and taking a good hard look at what I was making.  I favor swatching by starting to knit the actual garment, then pausing to check on gauge and all that good stuff when a bit of the piece has been worked.  Most of the time, I know how my knitting habits will interact with the yarn and pattern and can make a solid guess about which needle size to use to get gauge.  In rare lucky instances, I know how the designer writes and can make yarn and needle choices accordingly.  In other cases, I do my best and either I don’t know the yarn or I don’t know the fiber or the design implements techniques I don’t often use and for any of those reasons and more it just doesn’t work out.

Determination is a good quality for a knitter to have, and patience, but what I realized as I took a good hard look at (um) five of my UFOs is that honesty is equally important. 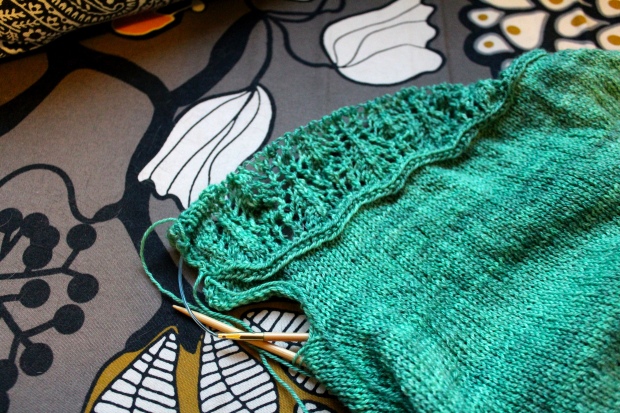 Waterlily Tee, shaping up (for now)

Thankfully, the Waterlily Top is proceeding without incident for now.  Fingers crossed it stays that way!

The O w l s sweater not so much.  I had both sleeves knitted and the waist shaping halfway done.  The knitting started as a comfort during the loss of our cat Cassie, then just continued.  I convinced myself that it was ok that my gauge was larger, not smaller, than stated on the pattern and that the stiff, potentially bulletproof, fabric I was producing would soften up with wear.  Both those were utter lies and a spin through a yarn store that carried the full complement of Brown Sheep yarns, supported by a conversation with the proprietor, brought me to my senses.  I went home, pulled up Ravelry, and there it was.  Brown Sheep Burly Spun is a super bulky yarn, not the bulky O w l s calls for.  I frogged the whole thing and found a pattern in my library that called for the gauge I was getting.  Maybe the third time will be the charm with O w l s.

Project the third: a Spring Garden Tee to use up the remains of my yarn from the Francis top.  Should be simple, but I was in complete denial about how much this bamboo yarn stretches.  I have been wearing and washing Francis frequently this summer, and there are no two ways about it: Bamboo Pop stretches.  A little voice wondered about that when I blithely cast on this tee with size 6 needles, but I quelled it for weeks, wrestling with the yarn to get as tight a gauge as I could and pretending I didn’t notice how much the fabric expanded when I gave it a little tug.  Today, emboldened by how the world didn’t end when I frogged my O w l s, I took a good hard look at the tee and admitted what I’d known all along: the fabric was going to stretch and get sloppy.  Now it’s tidily frogged and waiting in its project bag with a size 5 needle.

The Twenty Ten Cardigan.  It should have worked.  The pattern calls for a size 8 needle, and my gauge was far too tight on a size 10.  I set it aside, I blocked it.  It was no use: I needed to go up another needle size.  Out it came.  The slightly rumpled ball is now packaged up tidily with its new friends, the size 11 straights.

After the initial shock of frogging not one but three projects, I’m quite glad I stepped back and took a good hard look at my WIPs.  If I’d been honest with myself a lot sooner, I would have lost less knitting time, but as far along as all these projects were, it had become impossible to argue that they were going to turn themselves around.  Silver lining, right?

What about you, readers?  When is the last time you had to be brutally honest with yourself about a project that wasn’t working?