It’s county fair season here in Kansas. My only experience with fairs is the Arizona state fair, which is more about the rides than agricultural excellence. I’ve been working a lot with agriculture documents at work, and decided that for a properly authentic Kansas experience, the county fair was the thing to do.

Even though it was raining, our little county fairground was packed to the gills with people. It was immediately apparent that there were two types of people at the fair: the farmers and ranchers who showed up in their jeans and work boots, and the city slickers sliding around in shorts and flip flops. Little 4-Hers calmly paraded around pigs weighing more than they did, while one of the city slickers spooked when the sheep she was trying to photograph decided to try and climb out of its pen on the off chance she had something edible on hand.

Sheep are surprisingly large close up. 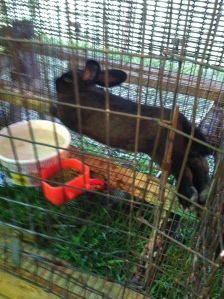 The bunnies were on display nearby, and thankfully, none of them wanted to come out of their pens. If I had that many small children squealing at me, I would stay put, too. The poor little bunnies looked ready to be done with all this county fair nonsense, so I quietly took one photo and let the poor little things be.

Although I did not photograph it, we also visited the exhibit hall. Most of the work was from more hardworking 4-Hers, but there was an open category for grownups too. The quilters went all out and did some incredible work, but I was surprised at how…non-show-offish the knitters were. They did good, solid work, but there was no extravagant lace, no hundred-color fair isle, no elaborate coats designed specially for the occasion. Perhaps all the desperately attention-hungry knitters had all taken part in the “make it with wool” event earlier? I’ll admit, my own inner show-off was going crazy with the possibilities. Whether I act upon this next year or not will remain to be seen, but…I may have already gone and looked up the rules.

Last but not least, funnel cake. Piping hot and covered only with powdered sugar.

City slickers and farmers alike, what is the best part of your county fair?