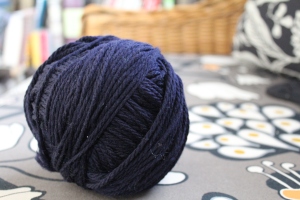 Remember this addition to the stash? It arrived early this year as a wedding present: Quince & Co. Osprey in Peacoat.

Yarn as a wedding present is quite knitterish, I know, but there is a method to my madness. I mentioned that this yarn is being knitted into a sweater for somebody. Well, that certain somebody is my Querido.

Gasp! The Boyfriend Sweater Curse, right? I’m not sure I believe in that curse, and I have three things going for me here:

1) Querido and I are officially married, so technically I am not knitting a boyfriend sweater

So here I am, trying to knit Querido a sweater that he will like. I totally missed winter, but we’ll set that aside for the moment.

He approved the dark blue, so we’re good there. I also had him test the Osprey for scratchiness using a skein already in my stash, double check. I suggested a cute pullover, but that was nixed because pullovers mess up one’s hair. This required some explaining, because I was really hoping to make him something without seams or knitted-on edgings. Apparently, it does not matter how cute one looks when one’s hair gets all disheveled by pulling on a pullover. Nor does it matter how little time one spends fixing one’s hair in the morning. If one’s hair is fixed, it cannot be disheveled.

I am sad about this, first because Querido would be quite adorable in a pullover with slightly disheveled hair and second because I am still quite bad at knitted-on edgings. But I found a cardigan in my pattern collection that I think will match all his requirements of fashion: Karida Collins’ Steve McQueen Weekend Cardigan.

Eloise was on hand to supervise the blocking process

The puzzling thing about this pattern is that I am only the second Raveler to knit it. The Weekend Cardigan was released in 2013 in Silver Screen Knits: Volume 1, which would give it some time to get through knitters’ queues. Perhaps it is simply because the collection overall has low Ravelry traffic? But aside from the fact that it is knitted in pieces and seamed, this pattern seems pretty simple. It’s all stockinette with ribbed edgings, with a classic understated cut. Most of the men I know are understated dressers, more Jared Flood than Stephen West.

So why haven’t these guys knitted themselves up a Weekend Cardigan, or been gifted one by their SOs? Perhaps it is planning to throw me a curveball soon–as of today, I am only halfway done with the sleeves. Or perhaps I’m just paranoid and it’s the lovely, overlooked pattern it seems.

Any ideas why there aren’t more Weekend Cardigans out there in the world?

8 thoughts on “Curse be Darned”