Soon after Querido and I were engaged, I hit upon this brilliant plan. I was going to go the extra mile, and not just buy my bridesmaids gifts, but *make* them gifts. Elegant stoles for each of three bridesmaids, and me! Each one knitted with the same special yarn, but a different pattern!

The first thing I needed to do to put my plan into action was to find the perfect yarn. I scoured yarn stores and the interwebs for yarns spun from special fibers and hand dyed. I decided pretty quickly that a wool-silk blend would be best, but which blue? Reds and greens are famous for their variability, but I’m putting in a vote for blue as equally variable. I had no way of knowing how accurate the colors I was seeing on my computer screen were, so I had to see some of these yarns in person. That plan quickly escalated to a yarn-buying spree. 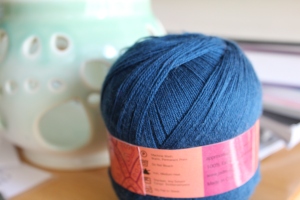 That last skein of teal? I bought 12 skeins of that because it looked almost blue on the store’s site. Living proof, people, that colors do not always display accurately on your monitor. After that setback and much more agonizing, I chose the yarn in the top photo–Swans Island Merino Silk in Lapis–as the winner.

Then I spent hours on Ravelry, looking at patterns. Patterns for rectangular stoles seem pretty rare, especially as the triangular shawl craze morphed into a crescent shawl craze, but “rare” for shawls is relative: I still found myself sifting through several thousand stole patterns in search for the right ones. Then there was the three-day period where I was convinced that gently curved stoles would be better than plain rectangles…I looked at a lot of stole patterns. Finally, I decided to knit the High Seas stole for myself because the waves mirrored the swooping lines of sequins on my wedding dress, but for my bridesmaids I went with simpler stoles that nodded to the Deco period’s geometric shapes. Hermanita’s is the Cleopatra Wrap from one of my favorite shawl designers, Miriam Felton. Although patterns by Susanna IC do not usually work for me, I chose the Rose Lace Stole for Monita. For my cousin, Bordeaux.

Then came the knitting. Oh so much knitting. My Epic Seas stole might have been the slowest, because there was shaping on every row, but it felt like the fastest because every row I was building the little waves. All the other stoles have a similar structure: a relatively detailed edge and a body of basic columns separated by eyelets. In tiny laceweight yarn. Oh so many long columns. 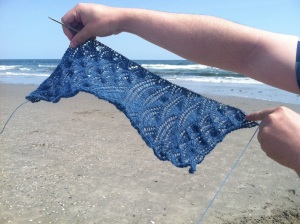 These stoles came with me everywhere: on the train to work, on car rides, on vacations. To movies and to the library. I don’t have that many in-progress pictures, in part because they were simply always there. Omnipresent and unavoidable, they occasionally became cat blankies.

Perhaps the worst part was that they were a surprise, and my bridesmaids are blog readers, so I could not complain to the blog about the agony of all this lace. When I wanted to vent about my once-brilliant plan to knit nearly 5,000 yards of laceweight yarn into stoles, all I could tell the blog was that the “Christmas gifts” were giving me trouble. Five thousand yards is actually 2.8 miles, so I guess I should say I went the extra two miles.

Just when I was sure they would never end, and I would be knitting blue lace until I keeled over dead, I finished one.

Knitting four large lace stoles in less than a year was a crazy plan, but on the big day, it was just as I had envisioned last winter: we were all done up in our silver dresses, and the blue of the yarn was a perfect counterpoint to the sparkles. Each stole was elegant and unique, all their travels (and travails) blocked away into drapey columns of delicate lace. Five thousand yards of merino silk yarn was the best way I had to say I was happy to be surrounded by three of the most special people I know, and I think they knew that’s what I meant. 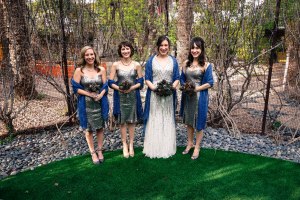 It was a great plan.

10 thoughts on “The Extra Mile”