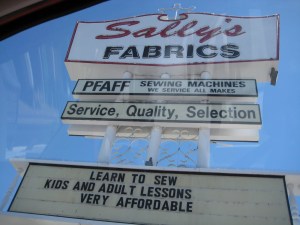 I have this very sweet, courteous coworker. We only work together on Sundays, and every Sunday, he asks if I did anything exciting that week. Considering I’m in classes 40+ out of 52 weeks every year, my response usually requires a pretty liberal interpretation of “exciting.” And yet he still asks–that is dedicated belief in the existence of exciting.

This past week, what passed for exciting was taking the car and driving out to The Hinterlands to the only independent fabric store around, which is also just about as far as the nearest big-box fabric store (just in the totally opposite direction).

Anyways–the excitement of driving to the Hinterlands is the signage. Somehow, they have managed to retain more of their old signs than any other city around, so as you drive in, you get a peek of what Arizona was like before the masses of people washed in, making tiny one-road downtowns explode into big sprawling cities. Driving by, looking at signs for motels, little florists, car repair places, and the fabric shop above, you almost feel like it would be possible to pull off all the 21st century grunge like an old carpet and reveal the city as it was, filled with cars the size of ocean liners and men in crisp chinos opening doors for women in full skirts and poufy hair-dos.

Also exciting was that this trip ended with me hitting the button jackpot. You wouldn’t think finding buttons for a sweater is all that hard–after all, most LYSs have their own little button corner, and then there’s the venerable Button Tin in my closet. Au contraire. I’ve been on the lookout for buttons for Monita’s Christmas sweater since January, and it took me until last weekend to find The Buttons. 8 months later, Christmas gifts are officially, unquestionably done.