Hiking, Shop on the High Street 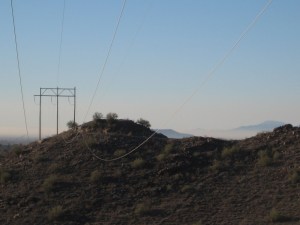 Well, it’s Monday again, and guess what? I haven’t gotten anything done.

Clarification: I got in a hike (picture of the telegraph lines above the trail), and completed my correspondence–which would have gone better if it involved me in an Empire-waisted dress with and a writing desk, not me in a Skellington hoodie with Gmail and Safari dropping my wireless at every opportunity. Now, I am attempting to get all my assignments for the week in order, but the clock is winning, and I’m going to drop everything half-done to get ready for a concert for which the tickets were bought eons in advance. I hate that–‘cos it’s all going to be there, half-done, when I lurch out of bed too early tomorrow morning. 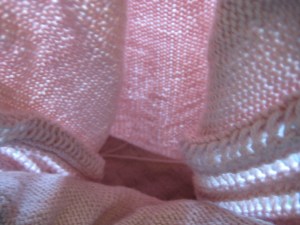 In other news: did anyone else catch the annual dose of pop culture that is the Grammys? I took the opportunity of a couple stationary hours to knit and knit and knit on the bottomless pit that is Hermanita’s Warm-Up. Since everyone can’t stop by to work a round and see the bottomless-pit-ness in action, there’s a picture looking into its depths.

As always, the show had its moments, but there were also several moments that made me shudder. Like the Jonas Brothers. And the Kings of Leon, some of whom also happen to be brothers. I’m noticing a theme here.

Also shudder-worthy was the Zac Brown band, which beat out Silversun Pickups as best new artist. *What* were they thinking? I mean, I would argue that Carnavas was the album that “established the public identity of the artist,” as the award criteria states. But but rather than quibble, how about we give the award to the people with talent?

I managed to keep knitting while thoroughly dissecting this and basically the entire show con las hermanitas y mamá tambien, and wonder of wonders, I now only have two inches to go before dividing for the Warm-Up front and back. Take heart–knitty news may soon prevail!