I Find Wisdom on the Inside of a Juice Bottle 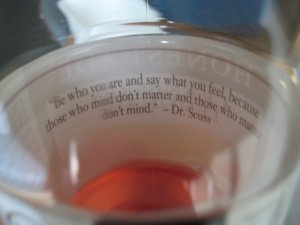 It was a really. Long. Week. Tucson was absolutely awesome, my class was awesome, most of the people *in* the class were awesome, but ye gods. Eight hours of information a day for seven days straight is a *lot*. So long that when I tipped back a rawther nasty juice I bought on impulse at the campus convenience mart, I thought putting a quote on the inside of the label was so terribly clever and insightful that I had to have a picture. In retrospect, I find it random, but the quote still holds.

I’ve been home a week, but it’s taken this long to get myself organized again, so let’s take a quick recap.

The construction workers made a really nice hole under my window by the end of the week. 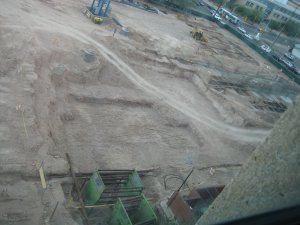 Mum’s Swallowtail Shawl is done, and she loves it. Evelyn Clark, you rock.

I learned Tucson is not the only city in the U.S. that paints their fire hydrants silver. (Quick poll: what color does your city paint its fire hydrants?)

And the second sock hit a snag. 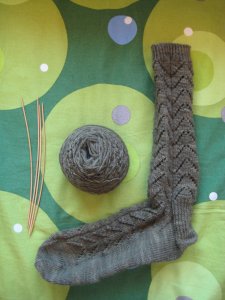 I’m pretty put out with myself for having done both things. However, stubborn perfectionist that I am, that’s given me the determination to get that sock started right back up again. (That, and I have a million and one things to be doing besides knitting socks)