State of the Stash: Third Quarter

Happy fall everybody! Peanut and I (and Querido and the fuzzies) are doing well. The temperature has dropped to a positively frigid 70º in the morning, and Querido and I are turning poor Peanut into a thin-blooded Phoenician by bundling him up for his walk every morning. He’s built up quite a layer of his own insulation, but there’s just something about seeing him curled up in his stroller that makes me want to bundle him in knitted things.

The arrival of fall also means the time has come to take a peek at the stash: yarn added, yarn removed, and The Percentage.

First up: Additions.  There are always additions, how could there not be?

Querido traveled to Burlington, VT for business in August. He asked if I minded him leaving me alone and after all these years he was still surprised that my answer was no, as long as you go to the yarn store for me. How did I know there were two yarn stores in Burlington, Vermont, a city I have never been to in a state I have never visited? The ladies at Legacy Fiber Artz talk about them fondly on their podcast 😉 Nido has since closed, which is too bad: it sounds like it was a really cool place. I asked Querido to visit the other store, Must Love Yarn, which is technically in the town right next to Burlington, for me. He did, risking getting stuck in an Über dead zone to bring me back two beautiful skeins of locally raised handspun mohair… 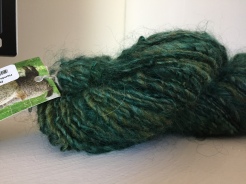 And a shout out on their podcast–squee!

I have been a regular viewer of the Legacy Fiber Artz podcast for a while, but right before Peanut was born I went on a bit of a podcast kick, hopping around and exploring podcasts mentioned by knitters I already followed.  One of my new discoveries was the Grocery Girls, based in Edmonton, Alberta.  I am somewhat behind the curve in the podcast department: they have been podcasting for over a year and have nearly 20,000 subscribers on their YouTube channel.  And dyers and yarn companies send them yarn for giveaways, so if you watch them you learn about all sorts of fun sources of stash enhancement.  Does everyone else already do that?  Anyways, I was knitting along, watching them squish yarn from far-flung corners of North America and beyond, when they pulled out a skein from Traveling Yarn, which is based, of all places, right here in Phoenix.

I basically dropped everything and bought a sweater’s worth in a pretty fall colorway called Turning Leaves.

Thankfully, Peanut arrived before I could discover any more new-to-me local dyers.  Very quickly, I discovered that while I rarely have my arms free for more than a few minutes during daylight hours, I am often stuck in one place under a baby, and my hands are just free enough to manage knitting.  Suddenly, projects that had been putzing along while I was free to get up and down and attend to each of a dozen things as they popped into my head began to gain momentum.

My reward for finishing the last Hands Occupied RALKAL was to join the new one, of course! This one runs until November, so there is plenty of time to join in, if you’re interested.

The yarn I’m using comes from even deeper in the stash than the Quince and Co: Madelinetosh Tosh Merino Light purchased at Purl Soho in 2010.  The bulk of it became a Leah’s Lovely Cardigan in 2013, and I still had two skeins left over (I just reread my finished object post for that one.  Apparently I have been a grumpy perfectionist forever!).  If I were recommending this yarn to someone else, I would have to say that as a very soft merino single, it is a stronger fit for a scarf than a cardigan.  I tend to wear the heck out of my fingering weight cardigans, cramming them into purses and hanging them crooked off the backs of chairs, leaning heavily on their elbows and washing them frequently.  I really should knit them in something hard-wearing and grippy that resists getting faded and pulled out of shape.  Merino + single = not very strong and prone to stretching.  That being said, my skin is more sensitive to grippy, prickly wools in warm weather, so I gravitate towards the sweaters knitted in softer merino.  Ah well–if I ever knit through my backlog of sweater yarn, maybe I can test out yarns that strike a balance between soft and hard-wearing.

Last but not least, the Less Traveled Yarn has jumped onto my needles in the form of a Miss Suzanne cardigan, which has already progressed beyond the sleeve division. 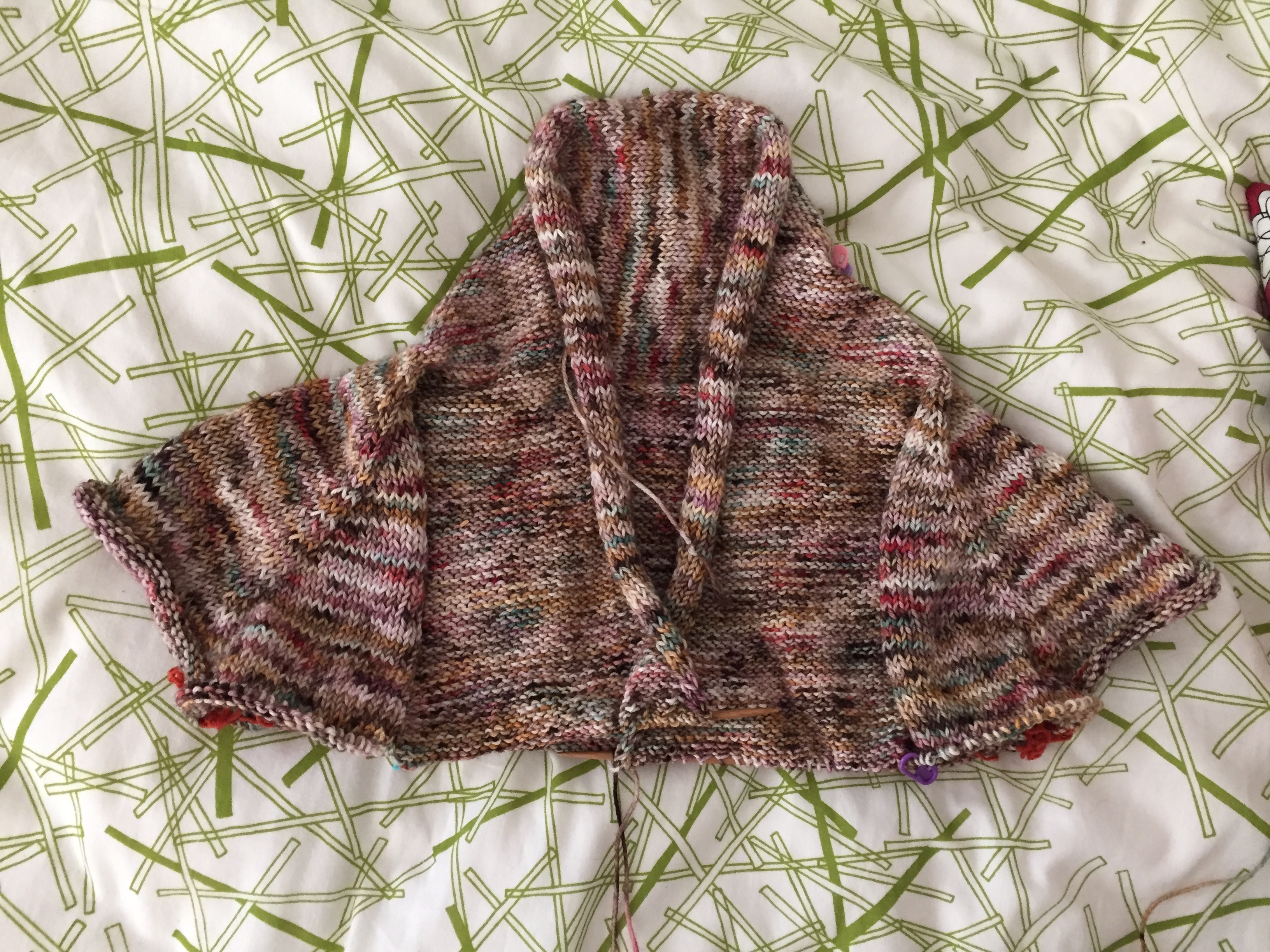 That’s a fair bit of yarn in and out, and I’m quite proud of myself for staying focused long enough to move at least one lingering project to a FO.  “But what is the percentage?!” you all scream, nails chewed down to nubs.  (No?  Ok, just pretend you can’t stand the suspense for me here)

Drumroll please…the percentage is 44.5% of stash additions knitted.  This is two percent more than my second quarter percentage–not bad, considering I bought a sweater’s worth of yarn!

Rather than just hope I will knit enough in the last quarter to come out at 100%, I ran the numbers.  To come out even I will need to knit up both Miss Suzanne and my Green Fade, which stands to reason since I bought the yarn for those this year.  But I will  also need to finish the Scarf of Dreams, Salal, and either Twenty Ten and Still Light or Across the Pond and Fatoosh.  I’m not entirely sure it’s possible, and I may well drop every single WIP tomorrow to knit all the baby sweaters, but I’m glad to have a sense of the extent of the work needed to make up the percentage.

What are your knitting goals for the rest of the year?